The New Moon in Aquarius is also Chinese New Year. It  marks the end of a 12 year animal cycle and a new energetic beginning. As I write, drums and cymbals go by on the street outside, but it has come with great anxiety in Asia. Aquarius tells us we live in an interconnected world, and coronavirus has heightened our attention to this permeability. This new moon also happens just a few degrees from December’s all important conjunction of Jupiter and Saturn at 0° Aquarius. Let’s hope the crisis gives us an enhanced ability to help each other.

Saturn-Pluto continues, and as I left Melbourne, the young man next to me said he was nervous about the new virus. He was flying home from 2 years of studying in Australia to see family for Chinese New Year. News of a new coronavirus, jumping frontiers from its origin in Wuhan,  central China, came just as enormous numbers of Chinese began to travel for the New Year celebrations. The 2003 appearance of SARS, came at the end of a Saturn-Pluto conjunction, with the planets still in four degrees of orb. Now there are massive quarantines, and the virus has spread to three continents. Celebratory events have been cancelled in Beijing. I fly home via Guangzhou on China Southern Airlines early February, and like other travellers, I feel worry over the rapidity of new cases. I have an industrial strength face mask, but your supportive prayers will be much appreciated, not just for me, but for the millions of travellers moving through the air.

On Wednesday morning, I spoke to a young woman lying at the side of a pool in Phnom Penh. She had come to Cambodia to escape the ash and sulphur-laden air of the Philippines. The eruption of the Taal volcano near Manila continues, sending volcanic tremors through the ground, and ash plumes into the air. I had just come from Australia, where Bushfire smoke had obscured the air in Melbourne, closed pools,  and cancelled races, and we were warned to stay inside. Australia’s magnificent natural beauty was not accessible on this visit. The people were warm and open as always, but in mourning for the loss of so much beauty, so much history and especially the great loss of animal life. Flights to the conference were delayed by thunderstorms, or even sent back till the next day. They did quench some of the fires.

Astrologers have known this cycle would bring an intensification of events: a concentration of five planets in earth over this past month has dispersed through the air we breathe. After I left, Julija Simas reported that red rain fell in her pool and garden. The heavy downfall of wet ash into waterways has killed thousands of fish. In Australia jokes turn to the Apocalypse, people ask is a plague of locusts next? The recent earthquake in Turkey adds to our sense of precarity.

Smoke and Mirrors in the US

The truth of events around impeachment continues to be obscured, by the lack of cooperation between branches of government. Depending on what you read or listen to, it’s a vast web of lies and obfuscation hiding serious abuses of power… Or it’s all a hoax, a partisan shake down.

Senate Majority Leader Mitch McConnell, born with Saturn conjunct Mars and Mercury opposite Pluto, may be best known for keeping order and unanimity among restive Republicans and for stonewalling the Democrats.

In Cambodia, conversation turns to Pol Pot, and the massacre of 25% of the population by the Khmer Rouge in the late 70’s. Pol Pot had an exact Mercury-Saturn opposition with Mercury sextile Mars-Pluto.. The power of persuasion comes with an implacable conviction.

During these times those born with Saturn-Pluto aspects often experience a resonant activation of their natal configuration. It can be empowering, those born in 1993 and 94 have the square, as do those born in 1974. They will experience key turning points, which can activate an inner power, once conflicts are dealt with. 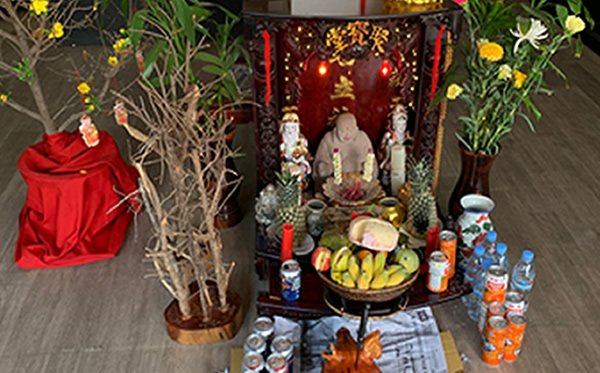 One thing that may help in the year ahead, is to say goodbye to greed. My hotel did just that with this impressive New year’s display including a knife in the roasted pig. Here’s to the fertility and creativity or the Year of the Rat, and energy for the new year.