Mars and Saturn are a bright portent in the evening sky.  For ancient astrologers this was an ominous pairing of two malefic forces.  The urgency and desire of Mars meets the unbearable constraint, the impassible limits of Saturn. But if we step back and reflect, this may not be such a bad thing. Mars is impulsive and immediate – it speaks to instinct, survival and war. The many eruptions of violence in the collective over recent months have shown what unbridled Mars can look like. Saturn’s blockages may be wearying, yet they may also serve to limit the excesses of Mars.

All energy lies first within the self, and so the real struggle may be between desire and frustration. We have choice about how to navigate limits that come from others, from outside. When we want something that isn’t happening, we may insist and push and insist again until something fractures.  What is broken now could stay that way for a long time.  In the next few weeks, our desires will come up against constraints of time, of discipline, of maturity. There is a before and after this transit that has weight and duration.

For some, August is the time to circle back round to a difficult decision. If there was a near confrontation back in March or April, late August may be the moment to come forward again, perhaps wiser and warier than a few months ago. It may be time to join forces with a more powerful adversary. Or to break away from a situation that can no longer be maintained.

Mars has had a long run without interference (as I wrote in my last post). It is now being pulled in. Unchained Id gets called to task as we get closer to the exact conjunction on august 24th. Saturn too can go to extremes so that a flare of individual protest can be crushed, extinguished, obliterated. Egged on by Mars, Saturn can also become monstrous and hard, repressive and tyrannical. Pushing these two archetypes to their limit ends up being fun for no one.

Inside each of us, the frustration of desire can lead to apathy, to a deep depression, a feeling of impossibility. If it has been hard to find the source of Joy, this conjunction in a sign of fiery spirit can reconnect the creative impulse, fire up our long-term goals. It may be that a very specific, very precise adjustment is needed for our energies, and our vision to be brought into alignment. At its best this combination of planets gives great accomplishment and the courage to carry out the most difficult of tasks. 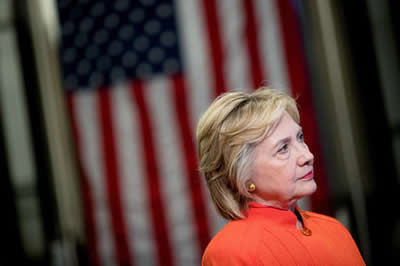 Think for a moment of the Mars styles of the U.S. presidential candidates. Hillary Clinton has Mars conjunct Pluto and Saturn in Leo – a powerful and authoritative combination. She is often described as “steely.” No one doubts her will, her strength, or her ambition. Her quest for power has been long and grueling, and she is a magnet for the darkest Plutonian projections. Boris Johnson, the former mayor of London, born with an impulsive Mars-Uranus square, once described her as resembling “a sadistic nurse in a mental hospital.”  She climbs doggedly on, wearing armor, weighing more in wounds than we could ever know. She triumphs as the first female candidate of a major political party in the United States.

Donald Trump also has Mars in Leo, very close to a Leo ascendant, which gives it force and impact. But Mars’ placement in the 12th house pulls it out of conscious control. Trump is identified with all that is solar: gilded, oversized and glamorous. His instinct and immediacy have served his high profile public career. His Mars is a loose cannon, fueled by a trine to the emotional Moon and further energized by a sextile to the Sun. This Mars has none of the restraint of Clinton’s. He feels real and uncensored to those who admire him. It’s fascinating to hear him use the language of Saturn: “We’ll build the wall, we’ll keep them out.” But with none of its substance, none of its restraint in his speech or his actions.

The upcoming Mars-Saturn conjunction resonates with Clinton’s controlled style. It is foreboding and disciplined, it favors the serious, determined and masterful. Many are beginning to worry that Trump cannot control himself. His impulse to punish those who disagree with him, withhold support and call for revenge, even mayhem, are all signs of a Mars out of control. Right now, his uncontained style is running into major obstacles. He is hitting resistance and serious disapproval from members of his own party.

Mars and Saturn are edging together day by day, accompanied by bright showers of meteors. The tensions are unmistakable. As they move forward, each of us is asked to bring our soul in for realignment. We are examining the edge of courage and fear, of desire and self-control. As we emerge we will know better where we want to go, and what we wish to accomplish. It is a time of great power.